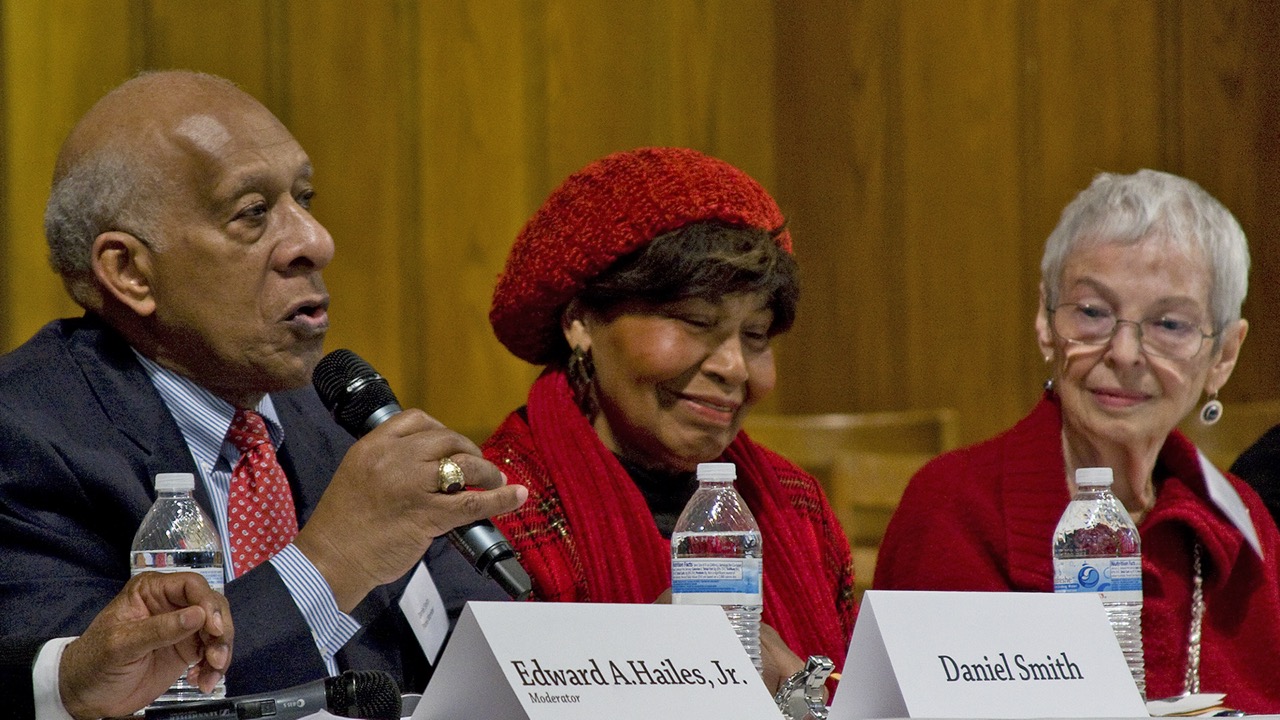 Were You There? Remembering the 1963 March on Washington

On February 23, 2013, the Overbeck Project, in partnership with Capitol Hill Village, sponsored a special Black History Month event in honor of the 50th anniversary year of the 1963 March on Washington, where Dr. Martin Luther King, Jr. delivered his historic “I Have a Dream” address.

During the program, the March and events leading up to it were brought to life by a former newspaper reporter and six panel members who shared insights on the civil rights struggles preceding the March. The celebration recognized the ongoing inspiration that the March provided as the civil rights struggle continued, ending segregation and securing passage of the Civil Rights and Voting Rights Acts.

In advance of the event, the Project solicited memories from people who attended the 1963 March. We asked those who remembered that day to submit their memories—or those of others who attended the March—via a special website section created for that purpose, “so that the lessons of that day and time are not forgotten.” Photos were encouraged.

That website section is no longer active, but the memories submitted during 2012–2013 have been compiled for posterity and are available on this site. Each of the stories reflects what one individual saw and felt on August 28, 1963, when Dr. King and other civil rights leaders addressed an unprecedented crowd that had gathered on the National Mall to demand racial justice.

One submission led the committee organizing the February 23, 2013, event to ask Daniel Smith to participate as a panelist, which he did. The committee is ever grateful to him, and to our keynote speaker Paul Delaney, our panel moderator Rev. Edward A. Hailes, Jr., other panelists Courtland Cox, Rev. Reginald Green, Mrs. Nettie Hailes (mother of Rev. Hailes), Brig Cabe and Capitol Hill Village member Judy Bardacke. Capitol Hill Village member Mike Canning served as master of ceremonies.

Thank you to our sponsers

The Lutheran Church of the Reformation generously hosted the 2013 event. Additional financial support was provided by the Capitol Hill Community Foundation, and the Walter and Karla Goldschmidt Foundation.

The most complete report on the February 23, 2013, event appears in Capitol Hill Village's March 2013 newsletter, written by Karen Stuck. Photos of participants, including panelists, speech contest winners, and the chorus from Friendship Public Charter School, Chamberlain Campus, are included.

The article starts on page 1 and continues on pages 5, 8, 9, and 11.
View CHV Newsletter
The impetus for the Were You There? event was the success of a gathering sponsored by Capitol Hill Village a year earlier. People who attended the 1963 March reminisced about their experiences, and others who were unable to attend told stories of what happened elsewhere that day, especially in DC's Capitol Hill neighborhood.

Overbeck Project volunteers recorded and transcribed the presentations and discussions that took place at the Hill Center on February 11, 2012. A full transcript of that session is available.
Read 2012 transcript