Here are links to a number of organizations and information sources that can provide a deeper understanding of the Capitol Hill neighborhood and its fascinating past.

The Capitol Hill Restoration Society has been fighting to preserve and maintain the neighborhood's historic character since 1955, and its annual House and Garden Tour is one of the highlights of the year. Among other resources on their website, an extraordinary collection appears on the "House Tour Brochures" page, which includes links to both Excel and .pdf files listing all the houses included in the annual tour since it began in 1958. The page also includes links to a complete set of house tour brochures.

Congressional Cemetery, resting place of John Philip Sousa and many other figures from our neighborhood's past, is maintained and interpreted by a very active organization of community volunteers, the Association for the Preservation of Historic Congressional Cemetery. The website includes functions that permit searches for internment records and obituaries of people  buried at the Cemetery, invaluable resources for historical and genealogical research.

The Martin Luther King Jr. Memorial Library, main branch of the D.C. Public Library, is newly reopened after a complete renovation of the building. The People's Archive is their reworked collection of unique resources that illustrate the District of Columbia’s local history and culture.

Hill Center at the Old Naval Hospital officially began operating as a neighborhood center in November, 2011. Their website includes the history of the building, which was completed in 1866.

The Hill Rag monthly community newspaper frequently runs features on the neighborhood's history and heritage. Archives for the Rag are stored online along with those for other Capital Community News publications.

The DC History Center, formerly the Historical Society of Washington, D.C., has an extensive collection of maps, images, publications and other material relating to the history of our city. The center is located in the historic Carnegie Library on Mt. Vernon Square NW.

Navigate the map on the HistoryQuest DC site to view information about the builder, architect, original owner and year of construction of most DC historic homes. Note that, with a few exceptions, houses built before 1874 are listed with a default construction date of 1874, because no building permits exist from before that date.

Brian Kraft, who created the HistoryQuest DC site (above), has also mapped hundreds of residences, schools, churches, and other sites mentioned in Overbeck Project and other DC oral histories to produce the DC Oral History Map. Both of these efforts were supported by grants from the DC Oral History Collaborative.

The Marine Barracks at 8th and I Streets SE is the oldest active post in the Marine Corps, founded by President Thomas Jefferson in 1801. Members of the Marine Band who work from that location lead the annual Capitol Hill Fourth of July parade.

Naval Lodge #4, which was founded in 1805 by officers and workers at the Navy Yard, has played a major role in the history of Capitol Hill. Its wonderful Egyptian Revival style meeting hall at 330 Pennsylvania Avenue S.E. served as the site of the Overbeck History Lectures for the first 13 years of the series, from 2002 to the Spring of 2015.

The Belmont-Paul Women’s Equality National Monument, formerly known as the Sewall-Belmont House, stands at the corner of Second Street and Constitution Avenue NE; it is operated by the National Park Service. One of the oldest houses on Capitol Hill, the building provides permanent exhibit space for artifacts related to the historic National Woman’s Party.

The United States Capitol Historical Society was founded in 1962, "chartered by Congress to educate the public on the history and heritage of the U.S. Capitol, its institutions and the people who have served therein."

The Washington Navy Yard at the foot of Eighth Street SE is the U.S. Navy's oldest shore establishment, dating from 1799. Originally a shipbuilding center, then an ordnance plant, it was the biggest employer in our community for about a century and a half. A new National Museum of the U.S. Navy is planned for the Navy Yard location.

Wymer's DC website consists of an interactive map that places many of John P. Wymer's 4000 historic images from 1948-1952 onto Google Street View. The photographs represent Wymer's comprehensive photograph collection of the city matched to the current view at the same locations. The website provides information about Wymer and how his collection became the property of the Historical Society of Washington. 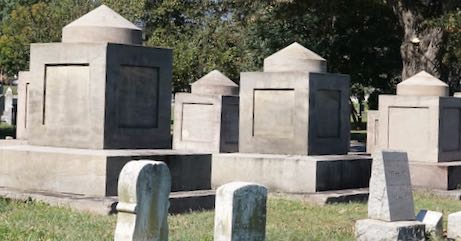 Capitol Hill resident and historian Ruth Ann Overbeck was the inspiration for the Capitol Hill History project. She is buried in historic Congressional Cemetery, close to the Latrobe cenotaphs that mark the graves of Congress members who died in office and honor those buried elsewhere.

The words "Look It Up!" carved on Ruth Ann's gravestone inspire us to promote research of the history of Capitol Hill in multiple ways: sharing our bibliography and online links, finding and recording interviewees with unique stories, and selecting lecturers to educate and stimulate an interest in the past.