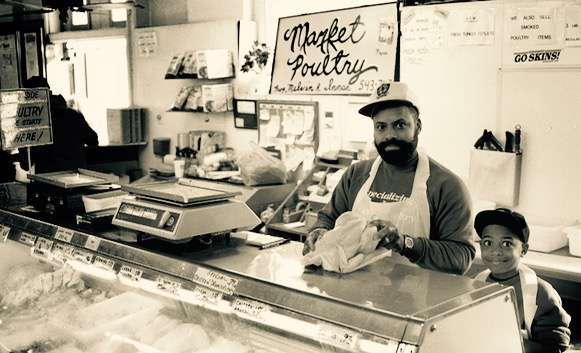 Capitol Hill’s historic Eastern Market has been a commercial and social hub for the community since it opened in 1873 to replace the neighborhood’s original public market near Sixth and K Streets SE. With merchant stalls for meat, produce and other fare inside and with many other vendors gathered out front on the weekends, it’s the only facility of its kind still operating in the city.

In April of 2007 the Market was devastated by fire, and under the leadership of the Capitol Hill Community Foundation, neighborhood residents responded with an outpouring of support for the displaced merchants while the city undertook a complete restoration of the site.

During 2008–2009, the Overbeck Project commemorated the fire and the community’s inspiring response by conducting an ambitious set of oral history interviews with Market merchants and vendors, along with others who played an important role in the facility’s rebirth. Elizabeth Lewis coordinated the efforts that produced over 30 interviews within that time period. Use the Eastern Market filter on our Interviews page to select those timely interviews and others in which Eastern Market is a major topic.

Also with financial support from the Community Foundation, Capitol Hill native Langley Bowers recorded interviews with vendors and neighbors and produced a 20-minute video documenting the Market’s rebirth. “Eastern Market: The Rebuilding” incorporates original footage of the fire, old and new photos of the Market, and scenes from the Market's June 26, 2009 re-opening ceremony.

Among our Eastern Market interviews are three with Calomiris family members, whose produce stand has been owned by three generations. Chris, the family patriarch, kept handwritten records of the occupancy of each South Hall stall for over 30 years starting in 1963.
REad Market Records
Eastern Market was nominated twice for listing on the National Register of Historic Places. Pages 1–5 of the 51 page document linked below is the National Park Service nomination submitted in 1971. Pages 6-51 are the completed form submitted in 1995. Physical characteristics of Eastern Market are described, as well as details about South Hall operating procedures. A sketch of the 51 stalls operating in the South Hall in 1914 is included, as is a neighborhood map showing residences of 36 merchants who lived near the market around 1914 - 1920.
Read NPS Document