Here are some books and publications that offer good, general background on the history and development of our neighborhood and the city as a whole. Please contact us with any suggestions you may have for adding to this list

Chris Myers Asch and George Derek Musgrove. Chocolate City: A History of Race and Democracy in the Nation’s Capital. University of North Carolina Press, 2017. 609 pages. With telling detail and personal stories that illustrate social trends, Asch and Musgrove have written a history of the city up to 2010 that highlights the impact of national racial policies and local politics on the structural organization of the city and on the lives of all its residents.

Scott W. Berg. Grand Avenues: The Story of the French Visionary Who Designed Washington, DC. Pantheon Books, 2007. 336 pages. This excellent biography of Pierre L'Enfant recounts his contentious relations with his official overseers as he mapped out a new federal city.

George R. Brown. Washington. A Not too Serious History. Norman, 1930. 481 pages, including a 40 page chapter on Capitol Hill history, plus other references. Described as "certainly one of the more readable, enjoyable books about the District."

Charles Carroll Carter, William C. diGiacomantonio and Pam Scott, with maps by Don Alexander Hawkins. Creating Capitol Hill: Place, Proprietors, and People. United States Capitol Historical Society, 2018. Comprised of four carefully researched essays, this may be the best book to date on the early history of the Capitol Hill neighborhood, with a particular focus on Daniel Carroll and other early land owners whose plantations gave way to this part of the new federal city. 304 pages, well illustrated, with excellent maps by Don Hawkins.

Elizabeth Clark-Lewis, Editor. First Freed: Washington, D.C., in the Emancipation Era. Howard University Press, 2002. 184 pages, paperback. Slaves in Washington were freed nearly a year before slaves in the rest of the country, and their owners were compensated for the loss of their property.

Paul Dickson and Thomas B. Allen. The Bonus Army: An American Epic. Walker & Company, 2004. 370 pages, with many photos. In the summer of 1932, in the depths of the Depression, some 45,000 World War I veterans descended on Washington to demand payment of a cash bonus promised them eight years earlier for their wartime service. In makeshift camps on Capitol Hill and elsewhere around the city, they rallied peacefully for two months but failed in their effort and were driven out of the city by U.S. troops under the command of Army Chief of Staff Douglas MacArthur.

Patsy Mose Fletcher. Historically African American Leisure Destinations Around Washington, DC. The History Press, 2015. 191 pages. Recreation and places for leisure activities are often not discussed in civil rights histories but they provide an important facet of that history. This book contributes both research and photographs to a fuller understanding of the lives of Washington’s African Americans from the 1860s – 1950s.

Ernest B. Furgurson. Freedom Rising: Washington in the Civil War. Knopf, 2004. 463 pages. Stories of ordinary people – long-time residents and newcomers; slave, free and newly emancipated; soldiers and society figures – provide fascinating texture to the lives and thoughts of well-known political figures and generals who populated Washington during the Civil War.

C.R. Gibbs. Black, Copper, & Bright: The District of Columbia’s Black Civil War Regiment. With a foreword by Frank Smith. Three Dimensional Publishing, 2002. 278 pages, softcover. An interesting account of the formation and service of the First Regiment, United States Colored Troops, the African American men of the District of Columbia who volunteered to fight for the Union in the Civil War.

James M. Goode. Best Addresses. A Century of Washington's Apartment Houses. Smithsonian Institution Press, 1989. 587 pages. Photographs by James Stafford Phillips and James F. Tetro. ".a detailed history of more than a hundred of the capital's distinguished surviving apartment houses, as well as many landmarks that have been demolished." Includes Penn Mark at 650 Pennsylvania Avenue, SE, and the condominium behind it at 649 C Street SE.

Mary Z. Gray. 301 East Capitol: Tales From the Heart of the Hill. Overbeck History Press, 2012. 263 pages, with period photographs. At age 93, Washington writer Mary Z. Gray remembers in delightful detail what it was like to grow up on Capitol Hill in the 1920s. A must-read for anyone interested in everyday life in the neighborhood in the early 20th century.

Jesse J. Holland. Black Men Built the Capitol: Discovering African-American History In and Around Washington, D.C. Globe Pequot, 2007. 192 pages, softcover. Recounts the numerous contributions of African Americans to the city’s construction and development, particularly in the years before emancipation.

Harry S. Jaffe and Tom Sherwood. Dream City: Race, Power, and the Decline of Washington, D.C. Simon and Schuster, 1993. 352 pages. Two of Washington’s most respected journalists offer a depressing account of the city’s troubles in the latter years of the Marion Barry administration.

Constance McLaughlin Green. Washington: Village and Capital, 1800-1878. Princeton University Press, 1962. 445 pages. And Capital City, 1879-1950. Princeton University Press, 1963. Two volumes, 558 pages. Widely regarded as the definitive history of the District of Columbia. Although it contains no specific detailed chapters on Capitol Hill as such, the book does touch on people and places on Capitol Hill. There is an extensive bibliography including original source documents, memoirs, diaries, books, magazines, etc.

Constance McLaughlin Green. The Secret City. Princeton University Press, 1967. 389 pages. In this companion history to the volumes above, Green highlighted both the particular struggles and the accomplishments of Washington’s black citizens that had often been overlooked by white citizens.

Tom Lewis. Washington: A History of Our National City. Basic Books, 2015. 521 pages, with numerous maps and photographs. A good overview of the city's history, presented as a series of vignettes of individuals, both prominent and obscure, who built the city, shaped its politics and culture, and promoted or impeded the rights of its residents.

Kate Masur. An Example for All the Land: Emancipation and the Struggle over Equality in Washington, D.C. UNC Press, 2010. 364 pages, with photos, maps and illustrations. The title says it all. A thoroughly researched and documented account of the District’s unique emancipation experience in the 19th century.

Keith Melder. City of Magnificent Intentions: A History of Washington, District of Columbia. Intac, 1983. 706 pages, richly illustrated. Used for many years as a textbook in the DC public schools, this book provides a highly readable overview of the city’s history.

Jefferson Morley. Snow-Storm in August: Washington City, Francis Scott Key, and the Forgotten Race Riot of 1835. Nan A. Talese/Doubleday, 2012. 334 pages. A harrowing account of the racial tensions in Jacksonian Washington and their eruption in a race riot focused on Beverly Snow, a flamboyant former slave turned successful restauranteur. Francis Scott Key’s role as a prosecutor in the riot’s aftermath is not flattering.

Anthony S. Pitch. The Burning of Washington: The British Invasion of 1814. Naval Institute Press, 1998. Bluejacket Books, 2000. 298 pages. A riveting account of the invasion and how close we came to losing our new country.

John Clagett Proctor, editor. Washington Past and Present: A History. 5 volumes. Lewis Historical Publishing Company, 1930. Typical of many state and local histories produced at that time. Two volumes of history of the city and its institutions. Three volumes on leading citizens of the time, including many photographs.

Brad Snyder. Beyond the Shadow of the Senators: The Untold Story of the Homestead Grays and the Integration of Baseball. McGraw-Hill, 2003. 418 pages. The Homestead Grays were Washington's Negro League baseball team, one of the best in the country.

Southeast Citizens Association. Places and Persons on Capitol Hill. Stories and Pictures of a Neighborhood.1960. Limited to 1000 numbered copies. 82 pages. Illustrated history of Capitol Hill prepared by the Citizens Association. Includes an 1857 map showing the location of buildings, a photograph of the Old Masonic Temple at Fifth Street and Virginia Avenue SE and of many other buildings demolished to make way for government buildings or other development.

William Tindall. Origin and Government of the District of Columbia. Washington: Government Printing Office, 1908. 226 pages, including Index. Printed for use of the Committee on the District of Columbia, House of Representatives. “The distinctive object of this compilation is to present in chronological order the essential features of the principal legislative and official measures affecting the origin, establishment, and local government of the permanent seat of government of the United States, but a number of historical facts of general interest and not strictly within that category have been included.”

George Alfred Townsend, and others. Events at the National Capital and the Campaign of 1876. Hartford: Jas. Betts & Company, 1876. 456 pages. 45 illustrations. “A complete history of the foundation and growth of our governing city, a description of the public buildings and manner of living there, a searching exposure of the various jobs and scandals which have excited public indignation, full biographies of Hayes, Wheeler, Tilden, and Hendricks, besides various political statistics.” 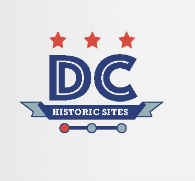 The DC Preservation League maintains a website of information about properties on the DC Inventory of Historic Sites, the city's official list of properties that contribute to the cultural heritage of the city, the nation’s capital, and the nation.

Featured sites are grouped into tours named according to the topic and/or neighborhood that's represented. Seven locations within the Capitol Hill Historic District form one of those tours.